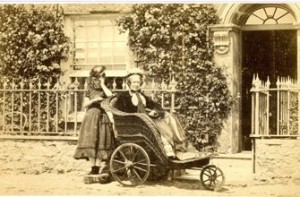 After the death of Capt. VOSS, his widow Elizabeth lived on in the Isle of Man to great age and became Grandmama and matriarch to 14 grandchildren.

Capt VOSS’ eldest daughter Elizabeth Collings VOSS married the Rev. Edward FERRIER, who in 1855 became Government Chaplain at Castletown, Isle of Man.   They rapidly had 14 children between 1856 and 1873, whereupon Elizabeth died in 1874, no doubt exhausted.  The Rev (now Canon) FERRIER married again in 1877 to Margaret Frissell CUNINGHAME.  I imagine he was keen to find a step-mother as well as a wife.

This large family brought Elizabeth’s parents and their daughter Rosa to visit and eventually retire to Castletown.  Glenda Lightowler of Isle of Man informs me:

The family was also no doubt visited by son Claude, a Political Advisor in India, who probably met there Charlotte WOODHOUSE, borne in the East Indies but who was in the Channel Islands in 1851 (aged 6), and the Isle of Man in 1861 & 1871.  They married in 1875, and in 1879 in India bore Margaret R C VOSS, the bequeather of Voss artifacts.

The third son Tertius also visited the family in the Isle of Man.  He married in London in 1883, but died within the year.

The eldest son Edward is last heard of at school in 1851 and probably died young.

There were no male VOSS descendants from Capt VOSSes sons, and Rosa never married.

Of the 14 FERRIER children it it is likely that several will have died young.  It looks as if Lucy Jane, Edward Henry & Henry Macheryce did not live to maturity but several will have done.  What happened to them?  I found no trace of relevant FERRIER in the Isle of Man when I looked, although Glenda Lightowler reports that the family was recorded as FERRIES in census records.

Amongst the many bequests of Margaret R C VOSS were ones to Isle of Man residents, but none to names fitting her cousins.  Of course they were older than her, and bequests might have gone to their children. Her property was left to one Gerald Sanford Youde of Staines, or his son if Gerald pre-deceased her.

6 thoughts on “What happened to Capt VOSS’ family? And what about the FERRIERs?”