I have previously posted about two family gathering photos in my possession.  My 3rd cousin Alice née MOTT believes these were taken at Brancaster on the north Norfolk coast during a REYNOLDS family holiday.  She identified several persons including her own father.  I have finally got around to identifying all but one of those on the two photos.

Beatrice Anna RICHARDSON was the daughter of Sir John RICHARDSON and Mary BOOTH and hence my GG Aunt.  In 1886 she married Charles Henry REYNOLDS.  Their wedding was beautifully described in A Grasmere Wedding, a record written and illustrated by Beatrice’s nephew John Booth RICHARDSON (JBR). It is still available today in Grasmere.  Charles and Beatrice lived in a substantial house “The Paddocks” in Thetford, Norfolk and raised a family there.  We have some paintings of the house and garden by JBR.

By 1910 the family of Charles and Beatrice was as follows: 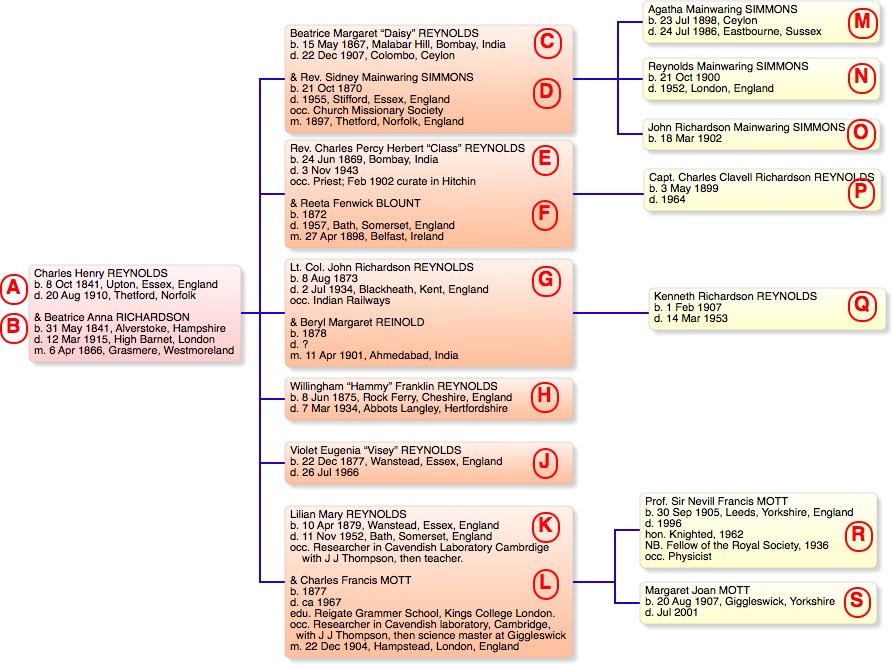 Click on the above tree to open it in a separate window so you can refer to it during what follows.

The photos which are the subject of this post are dated 31st August 1910, just after the death of Charles (A).  In the biography of his granddaughter Lillian Mary MOTT née REYNOLDS, Lillian’s husband wrote (pp76-77):

“Mr. Reynolds died on Saturday morning, the 20th August.  Four of his five surviving children were with him at the end […. son John was abroad]
After the funeral the family spent a few days at Brancaster on the Norfolk coast; they were joined by Lilian’s uncle, General J B RICHARDSON and his wife “Aunt Annie”.”

Charles and Beatrice’s eldest child Daisy (C) had died shortly before in 1907 in Ceylon, where her husband Rev. Sidney SIMMONS (D) was a missionary.  He was presumably still overseas at this time, but their three children Agatha (M), Reynolds (N) and John (O) had returned home and were being cared for by their unmarried aunt Visey (J).

The entire surviving family, apart from John’s, was present and I have identified them thus: 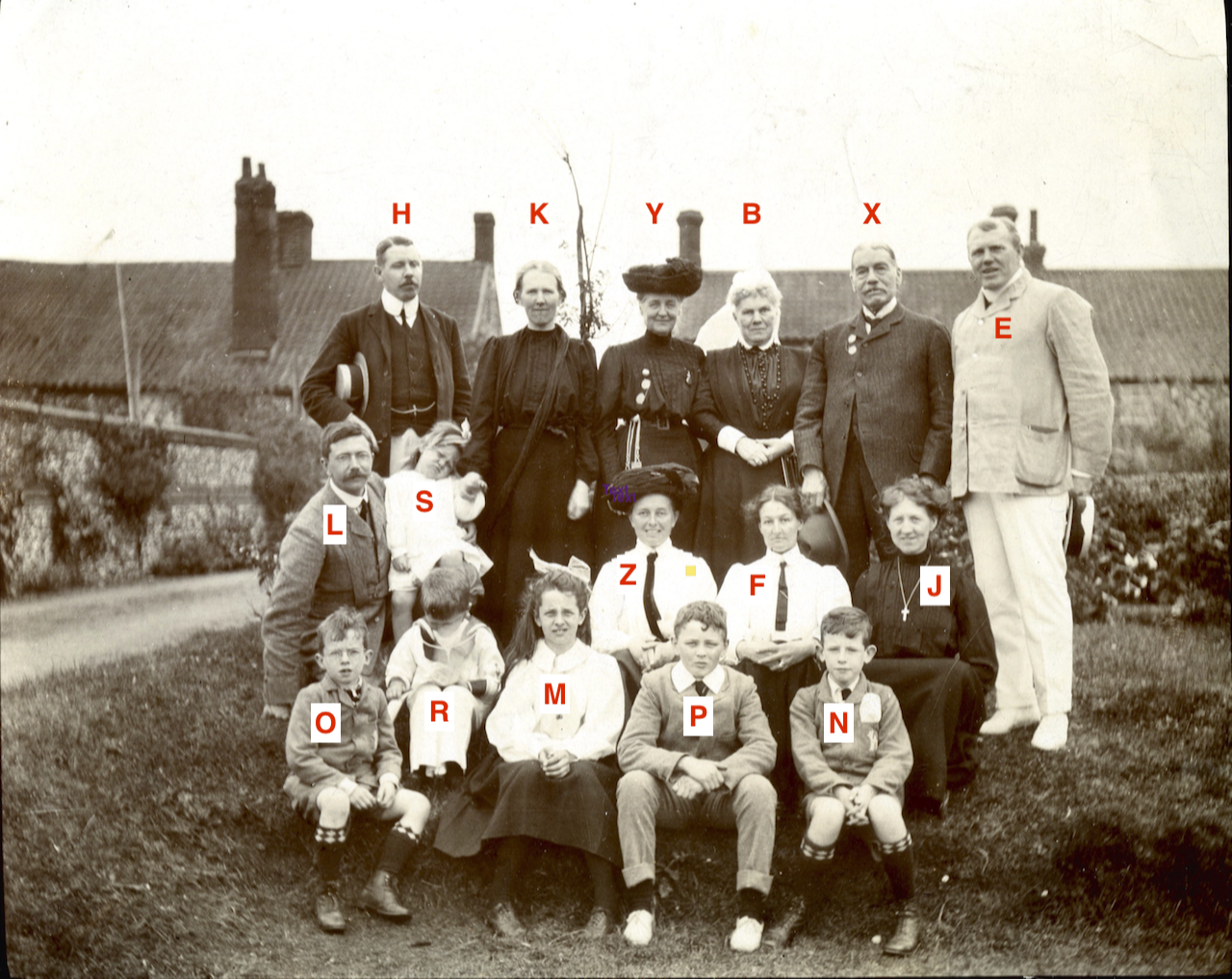 The visitors Gen. John Booth RICHARDSON (X) and his wife Annie (Y) are supportively each side of his bereaved sister Anna (B).  The lady centre middle row {Z) remains unidentified.  Perhaps she was Flora Albina Clavell BLUNT (b. 1868), the  sister of Reeta (F).

The photo of the children is dated the same, but was probably taken on another day or possibly on a subsequent occasion as the children are dressed differently.  They are all identified in this photo. 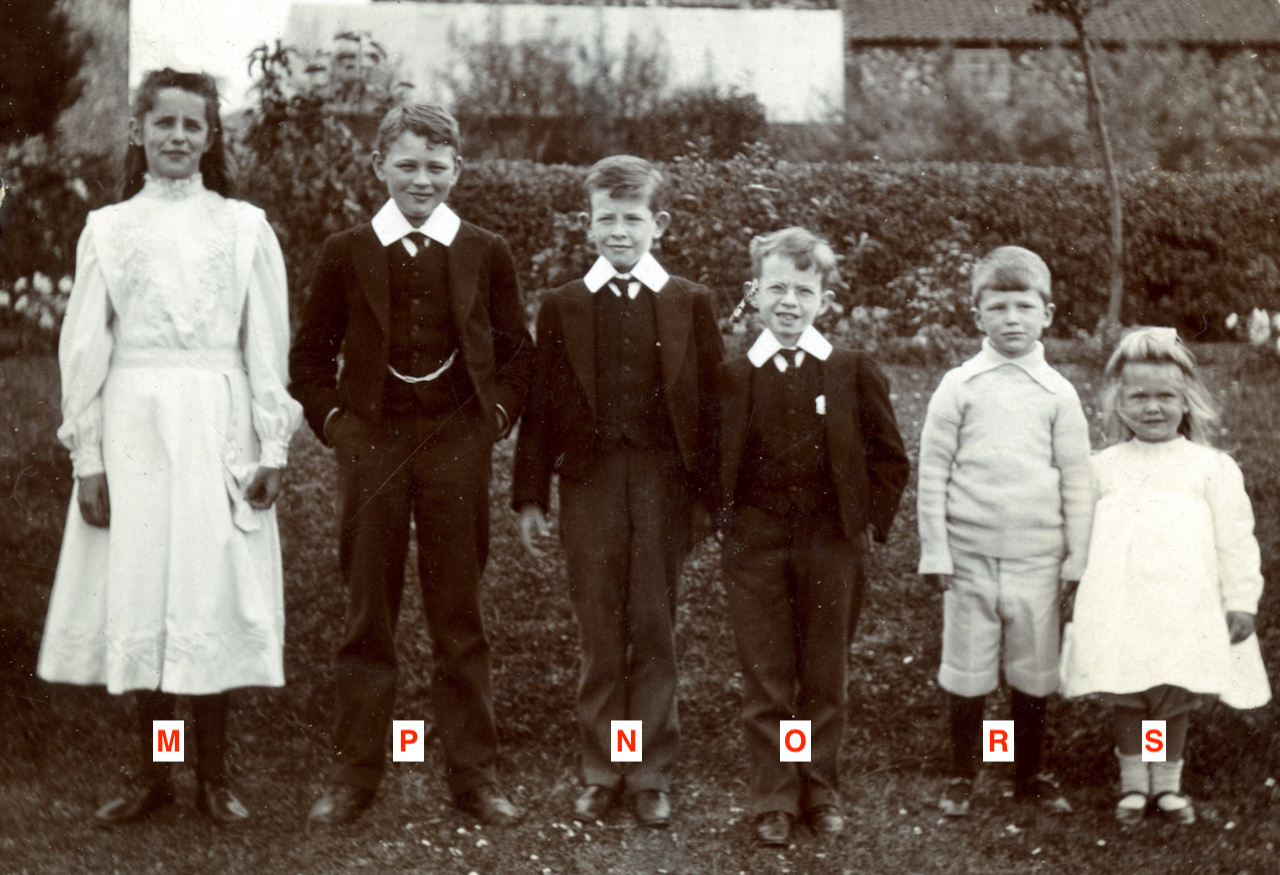 This has taken a lot of detective work.  If you have family photos, document who the subjects are!

1 thought on “Gathering of the REYNOLDS family in 1910”