My GGGrandfather Sir John RICHARDSON (SJR), when not exploring the arctic, was a medical officer in naval hospitals.  In 1838 he was appointed physician at the Royal Naval Hospital Haslar.  During his seventeen years there he pioneered many reforms, including improvements in hygiene, the introduction of general anaesthesia and professional nursing. 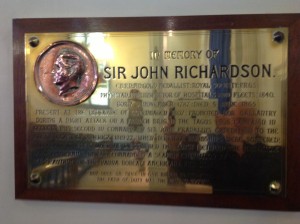 The hospital closed in 2007 and was sold off.  As I now find myself living just a short ferry ride across Portsmouth harbour from Haslar, we sought to visit before history was erased.  In mid November we were shown around by Eric Birbeck of the Haslar Heritage Group.  He showed us St Luke’s Church, which includes a plaque in memory of SJR. I understand SJR and his family preferred to attend the local parish church in Alverstoke – St. Luke’s was not very amenable in those days, but today it has been carefully restored and has a lovely feel to it.

I was particularly keen to visit House No. 12, where the Richardsons raised five children, including my GGrandfather Willingham Franklin RICHARDSON.   SJR managed to get the house extended on the 1st and 2nd floors, creating a magnificent long dining room  and bedrooms above, while leaving a passage under for access to the stable block at the rear.  The dining room has a balcony overlooking the garden and stable block.

The hospital was home to a substantial number of naval ‘lunatics’ – most, no doubt, suffering from the impact of active service.  SJR changed the regime from one of keeping them locked up, sometimes in straight jackets, and “knocking them about” to one with what we would now call occupational therapy  —  with access to the open and work in the gardens growing vegetables.  His son John Booth RICHARDSON (JBR) returned to visit in 1916 and recalled in a memoir how as a child he played with “my friends the lunatics” and how much he enjoyed going off in a boat with them on fishing expeditions off Spithead.  He also wrote of a mishap when he and a cousin were experimenting with gunpowder and in which his cousin was injured.  His father responded “Well, if you are so fond of playing the fool with gunpowder you had better go into the [Royal] Artillary and learn to control it”.  He  eventually became their Colonel Commandant.

The cousin must have been Archibald John RICHARDSON, actually a cousin of JBR’s  father but two years older than JBR himself.  Archibald was orphaned at the age of ten and seems to have been taken care of by his elder cousin SJR, for in the 1851 census Archibald is shown to have been a visitor in nearby Alverstoke, with the head of household Mary Ann BALL, aged 60.  Ten years later he was still living with her in Southampton.  Mary was the widow of a seaman Sampson BALL, who had died in Chatham in 1838, and whose will had been witnessed by SJR, who was at that time a surgeon at the Melville Hospital there.  It seems that Sampson was a patient of SJR’s and that, after Sampson’s death, his widow Mary returned to her home county of Hampshire.  SJR must have taken her into his employ to look after young Archibald, so naturally Archibald would have visited Haslar and played with the other children.  Archibald eventually trained as a surveyor and in 1861 emigrated to Australia, where he became a member of the Jardine brother’s expedition to Cape York in 1864. [Research by Robert Kemp] 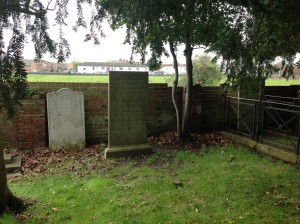 SJR’s second wife Mary, my GGGrandmother, died in 1845 shortly after the birth of their seventh child Edward Kendall RICHARDSON (b), who himself died at the age of 10. They lie buried together in the memorial gardens nearby and we visited the grave.  I was curious about their choice of Edward’s name.  SJR had a younger brother Edward Kendall RICHARDSON (a), who apparently died in Jamaica in 1819 or 1820, and it might be that the new son was named after him.  But I have also discovered that an Edward KENDALL was a member of the first and second Franklin expeditions and scientific assistant to SJR.  He subsequently married into the FRANKLIN family via a niece of Sir John Franklin (just as SJR had done!) but this time a niece through Franklin’s first wife’s side.  Edward KENDALL died in 1845, just before Edward Kendall RICHARDSON (b) was borne.  So infant Edward might have been named in Edward KENDALL’s memory.  Were these two connections co-incidence?  Presumably Edward Kendall RICHARDSON (a) was named after some relative  as yet unidentified.  Might the Edward KENDALL of the expeditions have been a descendant and hence some kind of relative of SJR?

I am pleased to learn that the Haslar complex is to be developed as a community-led regeneration and restored to its original layout by demolishing the modern concrete hospital additions.  It will then become a continuing-care community for war veterans and the ex-service community.  This is  very compatible with the values espoused there 175 years ago by Sir John Richardson.